Traci Kelly and Rhiannon Jones’ collaborative practice presents writing as a dynamic visual and lived encounter in a manner particularly suited to a gallery context. The work exemplifies practice–as–research and is theoretically grounded in phenomenology, feminist and post feminist perspectives. It intentionally subverts and ruins the representation of writing in order to privilege the visceral and subjective production of the writerly. 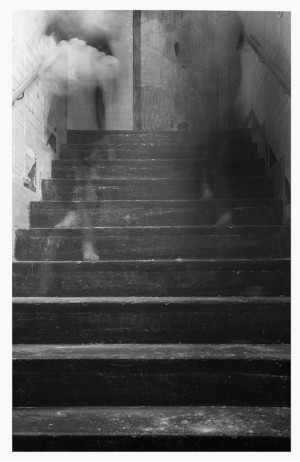 The momentum of the work developed during a writing residency initiated by Nottingham based international writer Michael Pinchbeck who invited the artists to collaborate in October 2014. The residency and the continuation into exhibition is an investigation into the materiality of chalk and writing as a physicality of site and self. The artists have predominantly employed performance and performativity as a temporal mode of making works, which exist in the interstice of documentation, artwork and survey.

Their collaboration all plays with video installation and photographs along with developing sculptural works and the utilising of debris from gestures to creative seductive and fluid abstract surfaces.

These Inter-related works explore writing as object, writing as materiality, the process of writing through the body and the subject invention inherent in writing a subject into being.

An unedited sketchbook of the current body of writing investigations, from which several exhibition works are distilled, can be viewed within these two facebook albums

Kelly & Jones’ residency in 2014 for The Drawing Board was a space for handwritten performances that aims to turn a corridor into a destination and to return the walls of an old school building in Nottingham to their former use as a place of display.

The Drawing Board explores how we write, how we perform writing and how writing performs. Curated as part of the public programme of Primary Artist Studios in Nottingham 2013-2015.www.drawingboardproject.tumblr.com